Our Community has history!

Our church is a beautiful landmark with a rich history that extends back to the roots of this community. First established in 1753, our church has sat on its present site since 1773. It was the original town meeting hall and is located at a major crossroads in the center of town. It has served as a hub for various activities and community groups throughout its history, a tradition we carry on to this day. The church is a meeting place for self-help groups, art lessons, tai-chi, yoga, meditation groups, clubs, musical events, and public forums.

Our congregation dates to 1747, and our current church was built in 1803. A landmark today, it was for many years the center of government and social life in Kennebunk.

In early Colonial times, Kennebunk was a part of Wells. Communities were then designated as parishes, and the church or parish furnished an essential meeting place. People in the Kennebunk area had to travel seven miles, most by foot, to the First Congregational Parish of Wells to go to church or community meetings. In 1750, they founded their own parish, called the Second Congregational Parish of Wells, on the Kennebunk River. 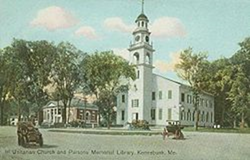 During the next decades, the center of activity shifted toward the Mousam River, and the congregation decided to build a new church at the crossroads where it stands today. The new building was completed in 1773 - just before the American Revolution. When Maine became a state in 1820, Kennebunk seceded from Wells, whereby the Second Parish of Wells became the First Congregational Parish of Kennebunk. By 1823, the church was painted white; before then it had been dark yellow. The congregation divided in 1826, and "Unitarian" was added to the name of the church.

We also have history with our ministers who led this church all the way back to the mid 1700s. Select these documents to read more...

Amidst Us A Shipbuilding Community

The year 1755 saw the completion of the first vessel on the Kennebunk River.”  11 years later Samuel Wakefield built a schooner at the Landing; so named for the lumber destined for West Indies ports that was floated down the river and “landed” along the river’s meadows. In the words of historian Tom Murphy, “the next 100 years would witness an outpouring of vessels whose beauty and dependability became a trademark of the Landing builders. Our community and this church are firmly rooted in the shipbuilding trade.

Our first meeting house was build at the Landing. Completed in 1750, it undoubtedly served as the heart of a fledgling community whose fortunes were about to change.  It’s hard to imagine the Landing as a frontier but life was hard in Maine in the 18th century. The founding members of this church knew about human suffering and felt a special compassion for those in trouble; contributing $200 to the people of Boston after a destructive fire, taking a special collection the people of Marblehead who had lost 170 of their men and boys at sea and donating 27 cords of maple, oak and birch to the oppressed citizens of Boston.

As the shipbuilding industry grew the Kennebunks became an epicenter of industry, commerce and wealth and people flocked to this area in search of their fortune. By 1772 we’d outgrown our original meeting house and voted to build a new meeting house at the present location. Building materials were donated by the members of the church, many of whom were shipbuilders. Legend has it that the beautiful mahogany pulpit and choir loft at the back of the Sanctuary were hewn from a great log found floating in the Caribbean dragged all the way back to Kennebunk behind a ship.

People who lived in the Kennebunks might not be able to tell you how to get to Oxford or Norway, Maine but they knew the coast and many of them had explored the coast of South America and the West Indies as well as the coastline of New England giving the Kennebunks something of a cosmopolitan air. Ships that were built here came and went bringing with them sailors and goods from all over the world.

In one way or another, the entire population linked their fortunes to the sea.  They knew the promise as well as the perils of the deep. As a ship prepared to leave port, the Shantyman would lead the crew in song, as much to bolster the sailors’ flagging spirits at leaving the comforts of home as to celebrate a bon voyage. A seasoned crew knew what they were in for – so they sang, putting on a good show, as much for themselves as for those they were leaving behind.

Singing was such an important part of the ritual of setting out to sea that the absence of song before the departure meant that something was amiss. There’s a sad story about a ship named the Isadore that set sail from Kennebunk on Nov. 30, 1842 only to wreck on the rocks at Bald Head within hours of leaving the Port.

Rev. William Mitchell who attended the launching wrote that, “A terrible gloom seemed to fall upon the crew as they left their homes for the voyage. None of the usual sailors’ songs were heard as they hoisted their sails.  One seaman had a dream that when sailing between the Piers at the mouth of the Kennebunk River he saw on the Eastern Pier seven coffins. He asked in his dream whose they were and the reply was, ‘one of them is for you.’”

After viewing the wreck Rev. Mitchell wrote that there were in fact, seven bodies stretched out on the beach waiting to be coffined and one was the man with the dream.

Sailors are a superstitious lot – in part, perhaps because their lives so often depend on forces so much greater than themselves. Their lot gave them a very real understanding of the precious and precarious nature of life – the sea could provide. It could also take your life. The songs of the sea are hymns that helped sailors keep their balance as they rode the waves between life and death – which brings me back to our fascination with the sea; a force much greater than we are – our source from whence we come and to which we shall return.