When our church building was enlarged in 1803, a bell tower with steeple was added by the designer, Thomas Eaton. In early 1804, he installed a 1,017-pound bell made in Paul Revere's foundry. It was the third church bell in what was to become the state of Maine. The cast inscription on the bell reads: "Revere & Son Boston 1803".

The bell is in regular use, for striking the hour of day and for ringing out the call to worship. Its perceived main tone is the key of "B," dominant among the several tones which accompany its ringing.

The Revere bell hangs from a wooden headstock, and is swung via the pull-rope wrapped around the large wooden wheel. The bell weighs 1,017 pounds, whi 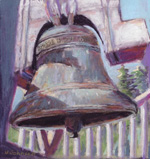 ch includes its clapper of around 35 pounds.

The beautiful artwork above was created by Norma Johnsen and donated to the Church in May 2004, during the service celebrating the 200th anniversary of this Paul Revere bell.

Please select  to see a Youtube viewing and hearing of this historic bell.

Although the body of the bell was cast mainly of soft metals (a mix of roughly 75% copper and 25% tin) the resulting bronze alloy is quite brittle. This is necessary for bells to ring well; however, this makes them vulnerable to damage from cracking. This is the main reason why fewer than 134 Revere bells remain intact today. Of these, only 23 were cast before Paul Revere retired from his company in 1811. Our bell is one of these.

The headstock of our bell is made of wood, reinforced with straps of iron and vertical through-bolts. To the headstock is attached a large wooden wheel around which the pull-rope is wrapped. On its way down the tower to the vestibule, the pull-rope passes over several pulleys to guide it.

Even though the bell weighs half a ton, it is easily set into a rhythmic swinging and ringing, which can be continued with mild pulls on the rope. As the bell swings, it hits the clapper hanging freely down the inside of the bell. Since the bell is in motion as it rings, the sound it makes is more complex than when the bell is stationary and the clock hammer strikes the hour upon it. An antique E. Howard round-top clock operates the hammer via a steel cable.

The congregation has a committee charged with keeping the bell components in good working order. In rebuilding the bell's ringing system, the committee members have gained some knowledge, which they are pleased to share with others who have a tower bell in their care. You may contact them through Stacy Wentworth via the church office.

For many years, our bell had not been rung due to a multitude of mechanical problems resulting from two centuries of wear, weather, and age. A Bell Committee was formed and charged with rebuilding and repairing to proper working order all the ringing apparatus and bell support structures in order to bring the bell back to life and regular use. As this work continued, committee members made a photographic record of what specific problems needed solving, and how we went about doing the repairs.

Initially, we thought this photo record would be of use only to those who would be taking care of the bell after us. However, we discovered that other churches also had bells in trouble, and were looking for help and examples. So, this picture section has two goals: to encourage others to repair their bell systems by showing them examples of how repairs can be done and to give other viewers a good look around in the belfry to answer the often-heard question, "What's up there?"