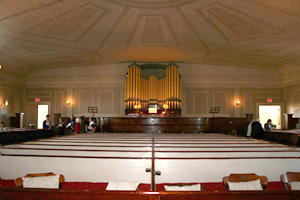 In year 2000 we celebrated our newly restored Hook & Hastings organ. It is appropriate to recount the history of fine instruments we have enjoyed.

First Organ: In 1819, Joseph Dane, Esq. and others petitioned the Parish to place an organ in the church and to build "a suitable case for the same." This organ was built by Dr. Joshua Furbish of Wells, known as a mechanic and mathematician and a self taught organ builder.

Second Organ: The 1819 organ was fated for the auctioneer's block as a second organ, also built by Dr. Furbish, was "placed in the singers' seats" in 1827. It was more powerful than the first, less dependent on the supplementation with basoon, bass viol and fiddle. Ebenezer Shackley contributed half the $400 cost. When the third organ was installed in 1850, the second organ was presented to "The Unitarian Society of Standish," (The First Parish, 1768 - 1946) so long as they shall support a Unitarian preacher."

Fourth Organ: Our present Hook & Hastings organ, the gift of Julia M. Lord was installed in 1900. Not as powerful as the organ in Mr. Hook's home church (The First Parish Unitarian in Jamaica Plain, MA) or as old as several we sold or gave away, the Parish has cared for this fine instrument, resisting all suggestions to "modernize" it, until now it has become a pilgrimage site for organ purists visiting Maine. In 1985, at a cost of $7,700, a complete restoration was accomplished by David E. Wallace, organ builder. In addition, space was found in the original design for 12 oboe pipes which had not been installed in 1900. These new pipes bring our instrument to its fullest power and balance much the excitement of all who play and enjoy its sound. Congratulations to us all

View this video created in year 2000 to promote the organ's 100th anniversary and restoration concert.

Select the spacebar to re-start the slideshow