Our Meetinghouse has history! 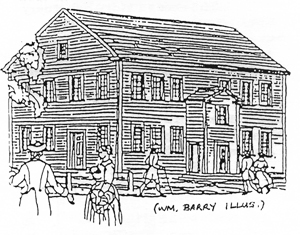 By 1771 the congregation of First Parish had outgrown its original meetinghouse located at The Landing. Needing a larger space provided the opportunity to change location as well. By this time it was clear that the town center had shifted closer to the Mousam River. The decision was made to build a new meetinghouse at the present location near the growing village. In 1774 the old meetinghouse was taken down. Doors, windows, pews, and other fittings were reused in the new meetinghouse. It was fifty-six feet long and forty-four feet wide. The two story building was open from the first floor to the ceiling. There were forty pews on the first floor and twenty-five pews in the galleries. The minister spoke from a pulpit high up on the far gable wall.

The town continued to grow and by 1803 the church needed to be enlarged. Housewright, Thomas Eaton, was hired for the job. The meetinghouse was cut in half and the rear portion moved back twenty-eight feet. The new section bridged the two old sections. The square steeple was built from drawings by Boston Unitarian architect, Asher Benjamin. Features of the four stage steeple include keyed belfry arches, Roman Doric columns, balustrades with urns, elliptical apertures, octagonal dome, spirelet, and an unusual ear of corn wooden weathervane incorporating a wrought iron lightning rod splayed top. The steeple, as well as the rest of the exterior, exemplifies the symmetry and delicate lines of Federal architecture.

The existing windows include the original sixteen over twelve pane sash, as well as the circa 1803 six over sixes. Originally painted yellow it has been painted white since the 1803 expansion, however, another change occurred in 1838. The congregation decided to divide the church horizontally into two separate stories. It was floored over at the gallery level. The Santo Domingo mahogany pulpit, mahogany drop leaf table (a rare New England form), pew rails, "feathergrained" pew doors and choir loft and panels were created. The handsome Palladian pulpit window and panels along the base of the side walls date prior to 1838. Popular legend says that the pulpit was carved from one log found floating in the Caribbean Ocean and towed back to Maine. 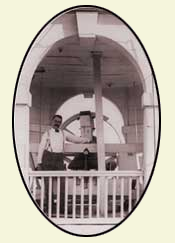 "Revere & Son 1803" is cast on the Paul Revere bell which was installed in the new belfry in 1804. The cost was four hundred and fifty-two dollars. Our present clock, an E. Howard "Roundtop", was installed in 1883 and converted to an electrical drive in 1975.

The tower clock, a gift of the Lord family, was installed in 1859, then replaced - paid for by public donation - in 1883. The Lords continued to wind the clock by hand each week for many years before purchasing an automatic winder.

The first floor evolved into a town meeting room, library, parlor, and entry hall. The Town meeting room, later the Sunday School Room, and now the Parish Hall has along the north wall the Day Memorial Mural of miscellaneous Palestinian scenes done by Mildred Burrage in 1930 after studying with Monet. Off the Parish Hall is a room now serving as the Religious Education Office but before that served as the Sunday School Library and before that did duty as the Selectman's Office for the Town.

Framed sketches by William Barry on the east wall of the Parish Hall show the meetinghouse inside before 1838 and outside before 1803. Rooms on the east side include the archive room, once the church office, the Parlor and the First Parish Library (first library in Kennebunk). The parlor contains a fine ancient chandelier, assorted antique furnishings, the original Isreal Trask pewter communion service, and numerous portraits of early ministers and laypersons. Among them are the two founders (together with second minister, Nathaniel Fletcher) of the Sunday School, Daniel Sewall and John Low, a portrait of Edward W. Lord by Maine artist, Hannah Skeele, and an Italian portrait of Tobias Lord, appropriately - for a church as tied to the maritime tradition - showing sailing ships in the background. 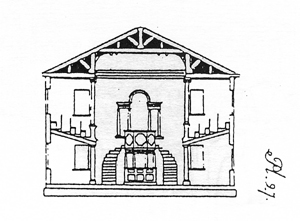 The twin staircase in the main entry built during the 1838 renovation leads to the second story Sanctuary which contains elements of the Federal, Greek Revival and Italianate periods. While extremely eclectic in taste and styles, the over-all effect of the room is pleasing and inspiring. Rational symmetry and simplicity combine with warm and opulent Victorian values. Dominating the room is 6,000 square feet of trompe l'oeil wall and ceiling painting, restored during the 1970's and again in 2007. Applied in the 1920's, it copies in oils the 1850 Greek Revival design which was replaced in 1881. Other features include "neo-rococo brass and ormolu" chandeliers, empire pulpit sofa and chairs, flame stitched gothic chairs, dozens of uniquely fashioned hassocks, several pews custom fitted with arm rests and writing desks, verses on the east and west walls from the Old and New Testaments (Micah 6:8 and John 4:24) and, gracing the south wall, the newly restored Hook and Hastings tracker organ, fourth organ to be installed in this room (1900). There is much, in this central place, to stimulate the historic imagination and the eye, as the play of light filtering through the clear windows evokes as well many moods for worship and meditation.